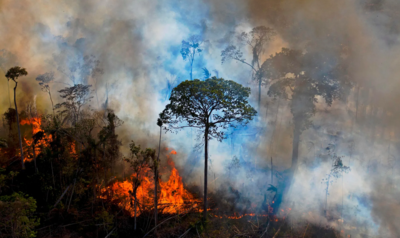 Climate crisis and logging is leading to shift from canopy rainforest to open grassland.

Much of the Amazon could be on the verge of losing its distinct nature and switching from a closed canopy rainforest to an open savannah with far fewer trees as a result of the climate crisis, researchers have warned.

Rainforests are highly sensitive to changes in rainfall and moisture levels, and fires and prolonged droughts can result in areas losing trees and shifting to a savannah-like mix of woodland and grassland. In the Amazon, such changes were known to be possible but thought to be many decades away.

New research shows that this tipping point could be much closer than previously thought. As much as 40% of the existing Amazon rainforest is now at a point where it could exist as a savannah instead of as rainforest, according to a study published in the journal Nature Communications.

Read the article on theguardian.com